Heidi Serwer—singer, guitarist, and songwriter—has always been into music. One of her earliest vivid memories is hearing Debbie Harry sing, then rap, in the Blondie song, Rapture, while listening through headphones as a young girl growing up in Michigan. But it wasn’t until Heidi was in her late-twenties, living in Chicago, when she decided to play guitar. The urge to write her own songs followed. This past December, Heidi released her first EP, Stranger, and played it before a crowded room at one of her favorite Chicago venues. For Heidi, who is also a busy mom of two children, playing guitar and songwriting, are as much a part of daily life as packing school lunches and the occasional date night. For more on how she mixes music and motherhood, read on. 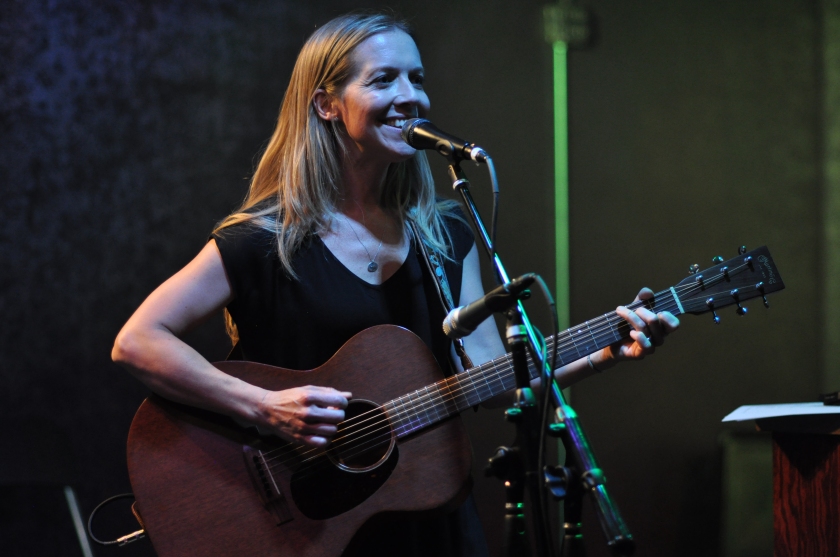 What role has music played in your life?

My parents love to tell a story of when I was one. They set me up on a huge pillow and played Pink Floyd all day. My parents introduced me to the idea that music brings out emotions and passion. I spent my adolescent and teenage years listening to pop music on the radio, and I have a lot of memories of being in my room, door shut, excited about a new Rick Springfield song.

Where did you learn to play guitar?

Old Town School. I took guitar there for over a year and learned a lot. 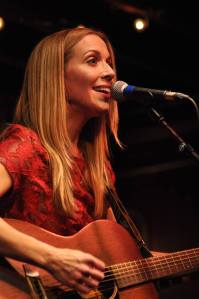 I was 27 when I took my first guitar class. After I had my son, Ben, two years later, I wanted to get back to music but I was just exhausted. I was playing casually but not taking it seriously. Then I got back into it. When he was a baby, I used to pick up the guitar once in a while. The guitar is an instrument you hold to your body and you can feel its vibration. Music is soothing to me in general, and something about playing is really calming for me. You only need to know two chords to be able to play so many songs. As I progressed and I got a little better, friends would come over and indulge my desire to perform and listen. Outside of everything else with work and having kids, it just felt good.

When did you start writing songs?

I always thought about it but it seemed intimidating to me. About two years ago, a friend of mine who has been writing songs all his life said: You can do this. Just try. He emailed me a little assignment, encouraging me to get a couple of songs down. Whether or not they were good didn’t matter. The idea was that I would eventually take a songwriting class at Old Town School. I signed up with a great teacher, Steve Dawson. Every week was a different assignment, maybe, take a movie character that inspires you and write a song from that perspective. In some ways, having an assignment freed me from being concerned about what I was writing. Our instructor said: Songwriting is a muscle you build up. If you write a little bit every day, it keeps that little part of your brain always thinking in a writing world. That world is always there, the door’s open a little bit, you just have to step in.

How old are your kids now?

My son, definitely. He’s played piano for years now. He loves classical music, rock ‘n’ roll, jazz, blues, all kinds of music. He helps me with my songwriting and he’s got a really good ear. He loves to listen and give advice. And I trust him. My daughter plays piano and ukulele. She likes music. We have fun together as well.

How has becoming a mother influenced your music?

So many of my songs start with an emotion, or a scene in my mind, or a word that someone said. I expand a little for creativity. I may embellish something. Being a parent brings out a lot of intense emotions. My songwriting is a place to put those emotions and capture them. I’ve been a parent much longer than I’ve been writing songs, but I feel like all those years of experience—extreme elation to total frustration—I can draw on those emotions to put into a story.

You mentioned taking a break from guitar after having your first child. How did you get back into it?

I was waiting for the right time to get back into class. For me, having a weekly commitment to learn something and to be committed to the people in the class—it culminates into this big show at the end—you feel like you owe it to them to rehearse and practice. That was good motivation for me. At the end of the day, my role as a mom is what’s most important. You always read: Put on your oxygen mask before you take care of your kid, put on your life vest. Do what you need for you. For me it rings true. And I feel like I’m a much better parent having a little something that’s my own. I see how happy my kids are and how I can involve them in something I’m passionate about, and hopefully, they can learn how to do that with their kids.

What is the toughest thing about balancing your creative side and motherhood? 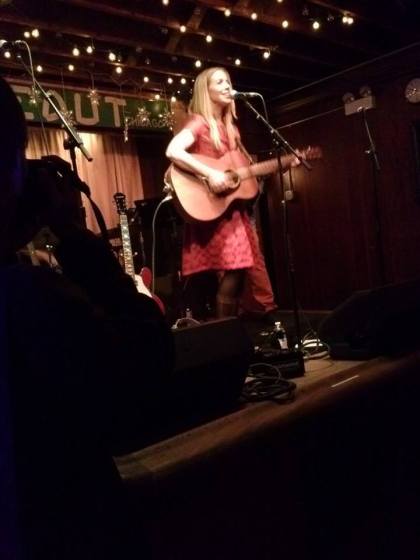 I find I write the best songs if I give myself a set amount of time. Which is not to diminish the songwriting craft, because there are so many people who write incredible songs that have taken time. It works when I don’t overthink it. You get yourself in a rhythm when you’re working on some kind of creative endeavor. As much as I said some of the best songs I’ve allowed myself only a short period of time, I could’ve spent the rest of the day and night just working on that song. It would’ve felt really good. But that’s not the only thing that’s out there. My children need me. So I think the hardest thing is when you love doing something, to be disciplined enough to say, okay, that’s fun. I need to stop doing that now and go back to my other responsibilities. I think that’s the biggest challenge in balancing it all. But it’s really not. I mean, how great that I found this thing that I love that my kids can appreciate.

What’s the best advice you have ever received?

Everyone has that inner critic. At different points in your life the critic is louder or quieter. I was applying for a summer job in college. I got all dressed up for this interview. I was so nervous. My mom said: Heidi, everyone’s faking it. Everyone feels like they’re just trying to get by. Just go in there and you fake it right along with the rest of them. It’s such a simply stated thing but I keep telling myself that with everything, with work, with raising kids. For the most part, at one point, everyone’s faking it and we’re all just trying to get by.

How does being a mother inform your passion?

First and foremost, I think being a mother sets my priorities. I have a wonderful husband and children I adore, and I feel very fortunate. So I can look at music and songwriting as the icing on the cake. Being a parent gives me a better perspective on all of it. And, anecdotally, there’ll be little things that the kids do that will inspire me to write a song or get an idea for a song.

How did putting together your EP, Stranger, come about?

When I got back to playing guitar after having my son, Ben, I thought it would be really fun to have an 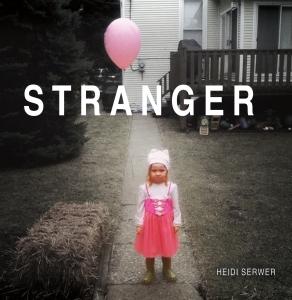 album someday. Two years ago, I wrote quite a few songs in a short amount of time. My friend, John Abbey, who was also my guitar teacher at Old Town School, produced the album. I sent John seven or eight songs. He said: These are the five songs that I think are coming from the same place. I really trusted John because I’ve known him for years and I knew he could help to interpret what I was trying to get across, in a way that would represent what I wanted and represent me. We really worked together.

What has been your greatest lesson from juggling music and motherhood?

Well, you can’t do it all perfectly. If it’s gonna stress me out to throw in another load of laundry before I get the kids, I’m just gonna take a deep breath and not do that task to make sure the time I spend with my children is meaningful, peaceful, and relaxing for them. It’s kind of learning what’s most important, and that’s joy and happiness and great memories your children will have and I’ll have. And what things I can do to enrich my life and enrich theirs to help achieve that.

Where are your favorite places to see live music in Chicago?

I’ve gone to big shows at The Chicago Theatre. The acoustics are amazing and the theater is gorgeous. My favorite places are the little local ones. The Hideout I’ve been going to for years. They have jug bands, rock bands, and alt-country bands. Silvie’s is a local venue where I play a lot. Schuba’s, and their bigger venue, Lincoln Hall, are my favorites. Constellation, which is the old Viaduct Theatre on Western and Belmont, is beautiful and the acoustics are amazing. My friend hosts open mike at a bar called Lizard’s Liquid Lounge. It’s been really fun. And Evanston Space is pretty great.

Where do you find inspiration, or what or who inspires you?

Songwriting is really stopping to notice things that you see everyday. Nature in everyday things that I see, and everyday objects and people are inspiring. I have friends who are writers and painters. Just seeing what they do and seeing how much joy they get out of it inspires me. I’m a fan of all sorts of music. I’m a big Wilco fan. I listen to a lot of Sufjan Stevens, he’s done some folk music. Thao and the Get Down Stay Down—she’s great.

Going to live music definitely inspires me. My husband loves it, so we do that together. Now that I’m writing songs I feel like I appreciate it so much more. It’s really enjoyable to look at it from a different perspective. It’s also about the community. Friends will come out in sleet and snow to listen to me play. And I try to do the same and support them as much as I can too. That’s really inspiring to hear other people perform and see them evolve.

Thank you so much, Heidi. For more on Heidi’s music, visit her website.

{Photos of Heidi playing live by David Sameshima; All other photos courtesy of Heidi Serwer.}